What is an Insect monitor spider trap?

You may have seen one of these monitor traps in the bathroom at a restaurant, or in the corner of a carpet store.   It’s a simple paper board glue trap typically white on the outside, with square edges measuring 3 – 4 inches wide and 2 – 3 inches deep.

On the outside you’ll find manufacturer model information in black, red or even orange ( marketing message colors) and a grid with months and weeks called a IPM Record Keeper.  Alternatively you may find a pest control company name on the outside of the insect monitor as a form of advertising.

The familiar tent type insect monitor will often have a rectangular cut out on either side, and a warning saying in English and sometimes Spanish “Do Not Remove” / “No remover” along with a grid that shows months and several columns.

Frequently these insect monitor traps will have a mounting strip or anchor on the underside.  Because the spider trap has windows, it can’t have a sticky glue / adhesive in those spaces, and also the ceiling has no trap surface.

Another characteristic of insect monitor traps is the placement of the glue.   Typically the traps distributed in sheets of 3 monitors, that can be separated into individual monitor traps.

Insect monitors have been a component of Integrated Pest Management ( IPM ) practices for decades.  Rather than just spraying pesticides everywhere, insect monitors would be set out and checked weekly to determine what, if any, insects (roaches, beetles, silverfish) or spiders of all types (house spider, hobo, brown recluse, black recluse) were present.  The results would be entered on the IPM Record Keeper (which is also visible from the top of the trap).  Pesticide usage would be based on the evidence of infestation recorded in the IPM Record Keeper ( this can be found on the side or top of the traps).

Once full or too dusty to function an insect monitor would be discarded and new monitor set in place.  Depending on the exterminator / pest control company policy, the record keeper data may or may not have been transferred onto the new monitor.  Only pest control companies purchased insect monitors until the 90s. The largest brands were Catchmaster 288i, Trapper Monitor Insect Traps and Victor Roach & Insect Traps & Monitor.

As the web became more ubiquitous consumers began to find access to products that they never would have seen in a grocery, hardware or big box store like Walmart or Target.   Insect monitors were among these new found Professional pest control products.   Because insect monitors are non-toxic, non-pesticide and simple to use, there are no FIFRA ( Federal Insecticide, Fungicide, and Rodenticide Act ) regarding usage or sales.

With access to these reasonably priced insect monitor traps, consumers began using them in homes, where the IPM record keeper, windows and marketing messages were not needed.  The huge plus was the deployment of multiple traps because spider traps don’t actually attract spiders, they intercept them.   (They also intercept insects, which then attract spiders as a secondary action)

There are several reasons why insect monitors are not ideal for home use.  The reasons all track back to the genesis of the insect monitor as a IPM tool.
( Many of these disadvantages have been over come with the the introduction of the Advantage Spider & Insect Trap )

So does a better Spider Trap exist?

Now that you’ve got a handle on the use of insect monitors as brown recluse or house spider traps, the question we most often get is:

What overcomes the disadvantages of insect monitors while keeping the advantages in a spider trap?

It turns out many consumer pest control companies offer retail packaged purpose designed spider traps, but the burden of wasteful packaging and consumer pricing makes them unattractive. We will explore why the Traps Direct Advantage Line of Spider Traps keeps the good and junks the disadvantages… 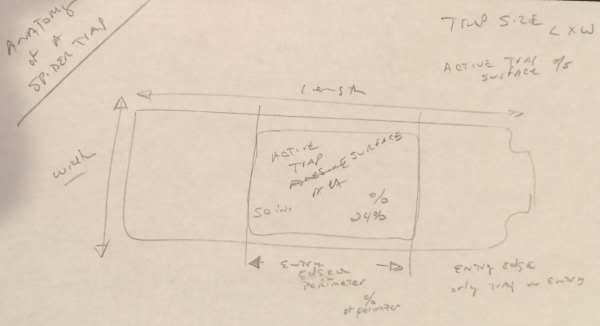